You may have heard the name “Sorare” floating around in blockchain and tech circles lately as it has been making waves and getting quite a bit of attention.

They recently raised $680m in Series B funding, a record for a European company and making it France’s biggest private tech company.

Sorare is a platform we have been using ourselves and really enjoying. We believe it is the biggest breakthrough in the sports trading space since Betfair launched 20 years ago and has huge potential for the future.

What exactly is Sorare though and how does it work? We’ll take a look at these questions and how you can get involved below.

Sorare is a French company that has built a blockchain-based website for collecting trading cards and using them in a fantasy football game. It was founded in 2019 by two French entrepreneurs, Nicolas Julia and Adrien Montfort.

The platform allows you to buy digital trading cards of famous footballers and enter them into fantasy football contests to win prizes. The cards are like digital versions of popular trading cards such as Panini and Topps cards.

The cards are fully licensed, either directly with clubs or leagues as a whole. At the time of writing they have licenses with 250 football clubs around the world. These include great names such as:-

Sorare also have licenses with full leagues including La Liga, the Bundesliga, the Eredivisie, the Belgian Jupiler League, the MLS and many more. Their goal is to have all of the top 20 leagues in the world.

So you can buy a digital trading card of players like Messi, Ronaldo, Mbappe, Haaland and Salah.

The cards come in different colours which relates to their scarcity, with the most valuable cards (unique) being brown, down to the least scarce (limited) cards being yellow.

One of the key characteristics of Sorare cards is that they are NFTs – which stands for Non-Fungible Token.

This means they are minted on the blockchain and cannot be forged, faked or copied and ownership is provable. They are also transferable out of Sorare onto other platforms and can be used in other games.

NFTs have been booming in recent times with an NFT by the artist Beeple selling for $69m and global sales of NFTs topping $25bn in 2021.

The beauty of the Sorare cards is that they aren’t just for collecting and trading, but can be used in a fantasy football game to win prizes too.

In this fantasy football game you have to enter a team of five cards, made up of:

Tournaments are split up into regions such as Europe, America and Asia and there is also an U23’s contest you can enter, as well as a global one allowing any player to be entered.

You score points based on the performances of your players on the pitch, with not just assists and goals counting like in some fantasy games, but all game contributions like tackles, passes, interceptions and so on counting towards a player’s score.

The fantasy game is really fun to play and gets you following all sorts of leagues, clubs and players from around the world that you wouldn’t have otherwise followed or even known about. The level of engagement in Sorare is very high and compares to that of Netflix, seen as the benchmark for engagement and retention in the digital world.

How You Can Win Prizes on Sorare

Many people have been attracted to Sorare by the potential to win prizes, just like with other fantasy sports games.

So there are different ways to win rewards and they can really mount up if you build a good squad and compose your lineups carefully. We have been tracking our own journey here and have won over $20,000 worth of rewards so far.

The threshold for scoring 205 or 250 points is very achievable and is a good way for new entrants to start generating some returns from the platform, although it should be noted that Sorare intend to replace this at some stage with a “Progress Bar” which will reward scores over a longer period of time (e.g. 1 month to 3 months) rather than each gameweek as is the case now.

In addition to all this, Sorare has also run special events where you could win prizes like VIP tickets to Real Madrid v Barcelona and signed shirts, thus combining the digital world with the real world. They have said they plan to offer more prizes like these in future.

Playing Your Sorare Cards in Side Games

As mentioned above, one of the benefits of Sorare cards is that you can play them in other side-games at the same time as using them in the main Sorare fantasy football game.

Lots of third-party sites have sprung up offering side games, including:-

So lots of additional uses there for your cards. Other than Sorare Brag, all these side games also offer you the chance to win cards, meaning even more chances to win rewards!

There is also development underway with the games company Homa Games to build a game for the Sorare Legends cards, which are cards of all-time greats like Maradona, Cruyff and Beckenbauer.

There are so many possible use-cases for Sorare cards and this is really just the beginning. Each extra game and use-case for the cards adds to their potential value.

One of the most exciting things about Sorare is the pace at which has grown since it was founded.

At the beginning of 2021 for example there were just 3,000 paying users on Sorare, but by the end of the year it had reached 75,000 paying users, with over a million registered users in total. That’s 2500% growth in paying users in just 12 months, which is quite amazing. And things are showing no sign of slowing down.

This has all been done with very little active marketing, which just shows the potential of the platform once they do commence marketing.

The interesting thing about Sorare is that because of the scarcity of the cards, the more users there are on the platform the more it tends to drive up the price of cards. That can be a double-edged sword – good for the cards you already hold but making it more expensive to buy new cards. The other effect is that encourages people to join now rather than waiting a while.

Such has been the phenomenal growth of Sorare that major investment funds have really been taking notice and wanting a piece of the action.

In February 2021 Sorare raised a stunning $50m in a Series A fundraising, backed by names like Benchmark, who were early investors in Twitter, Snapchat, Instagram, Uber and Spotify.

Benchmark, the venture capital firm that was an early backer of Uber, Twitter and EBay, is leading a $50 million investment into Sorare, a digital network focused on soccer stars like Lionel Messi and Mohamed Salah https://t.co/btdHAwnJw0

As if that wasn’t enough though they then went and blew it out of the water just seven months later when they landed a massive $680 in funding. The round was led by global investment giant Softbank and included other VC firms such as Atomico, Bessemer Ventures and D1 Capital.

It was a record for a European Series B round and made Sorare the most valuable private tech company in France. There was even congratulations from the French President, Emmanuel Macron! 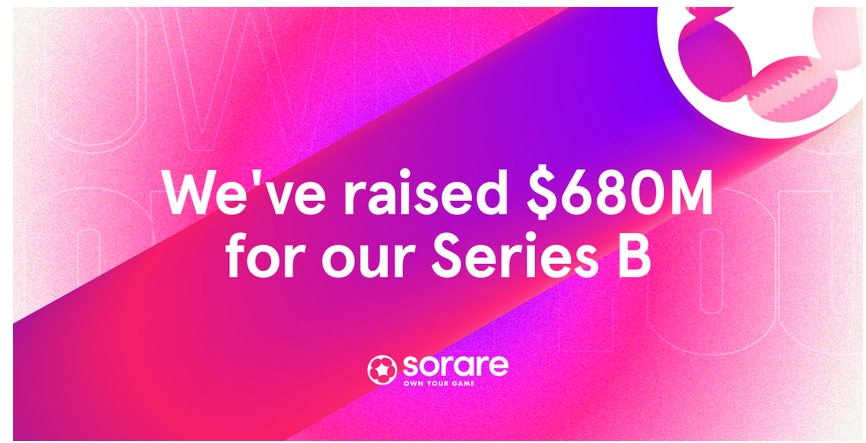 These two fundraises were not only huge endorsements of Sorare’s achievements in what they have created so far but gives Sorare massive firepower to improve the product and gameplay and attack new markets all over the world.

Sorare also plans to launch new sports, with the opening of a New York office suggesting they may be considering US sports like NFL, basketball and baseball. They are also aggressively hiring and plan to recruit some of the best talent in the world in their aim to become the next “Global sports entertainment giant.”

Sorare is breaking new ground by combining the digital and physical worlds with its fantasy football game.

Ownership of the NFT player cards offers provable digital ownership, portability into other games and real-world benefits in terms of prizes and VIP tickets to games.

It’s a very engrossing game and one we have really been enjoying ourselves. Scouting players, putting teams together and then watching your players’ performances on the pitch makes for a very engaging experience and we are not surprised that Sorare has achieved Netflix-like retention levels.

There is huge potential for the platform going forward and we believe Sorare could revolutionize the world of sports entertainment.